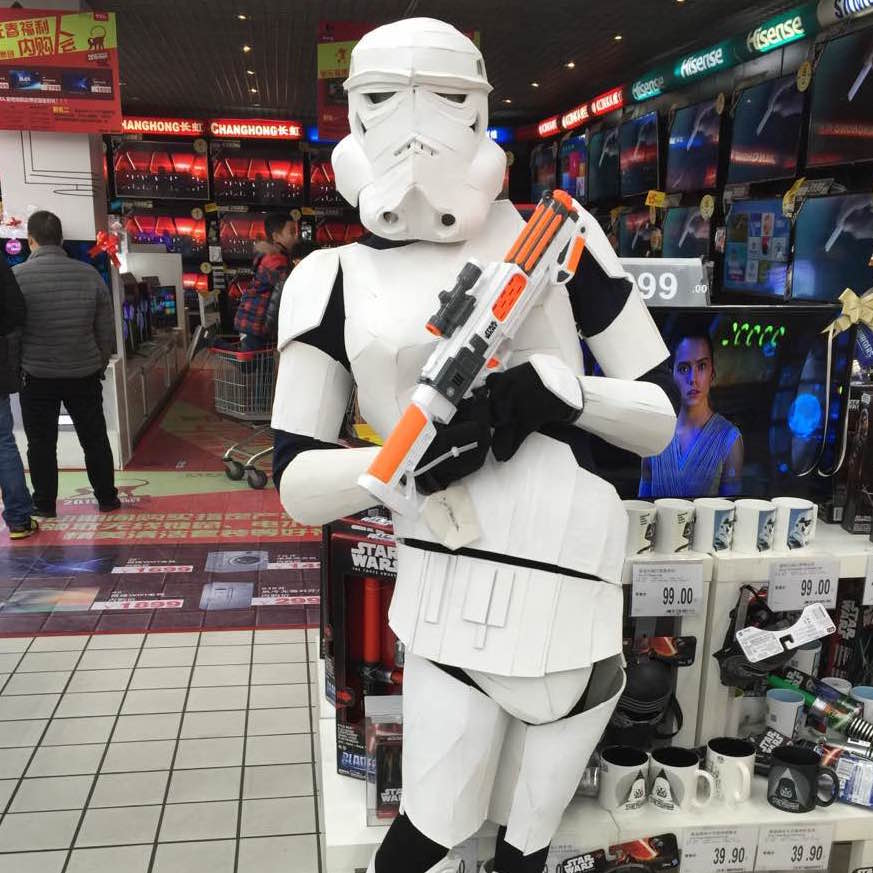 When fans around the world gathered in the 70’ies to celebrate Star Wars by making their own props and costume that was “beautiful” not because of the quality of craftsmanship ( in cases far from it) but because you could see a unification of people in something “greater”, there was emotion, there was a true bound being formed. Retrospectively it started a movement which became a sub-culture and now arguably a culture in its own right; one that transcend gender, age or race.

When Star Wars came to China with the prequels…it fared ok but failed to get the pull that the original trilogy had in the west. With EPVII launched there was “a new hope” for fandom in China and while it may not have yield all the results expected ( yet) there truly has been an “awakening”.

The local 501st has been highly active in supporting Disney in its bid to promote the movie ahead of its release and participated in major events around China. In the same time Disney did produce some amazing events, the Stormtroopers on the wall was an amazing stunt ! Some will argue ( rightly?) that it really played for the rest of the world more than intra-muros ( in China) but the fact is, it was awesome… Christmas time also had plenty of awesomeness with life size swings and tie fighter dropped around China … so yes the marketing worked.

On the branding side of things it may be another story. Back in September 2015 a studio in Guangzhou started producing knock off stormtrooper EPVII armours and sell them – unlicensed for 3800 US$ then started to rent troopers to bars etc.. for 300US$ per head per appearances which fared well during halloween period. Some bars and club had topless ( near enough) dancers with TK helmet on and a slew of other “non approvable” activities banking on Star Wars brand.

This is where I take the stance: strong Brand Guardian are needed. Of course Darth Vader walking the streets is some PR if the said Darth Vader is actually properly attired. Lucasfilm was extremely protective of the Star Wars brand in the west but it seems  China proved to be a huge challenge. You consistently see the Star Wars iconic brand ambassadors ( Vader and Troopers) being abused for commercial purposes. We are not talking about fans making costumes, we are talking about companies profiteering from the image; and by the look of it they have no idea of the actual brand, movie history or cultural impact. What is clear however is that each of these appearances could not care less about precision, quality of execution or show any indication of proper research … More alarming is the fact that we are not always talking about meaningless club in the north of China, or small commercial activities in a remote country side city’s supermarket. Some offense are quite major, attract reasonable visibility, obviously for profit and perpetrated by unlicensed companies.

Yes the only bad publicity is no publicity at all, and having these “things” happening maybe seen  as a promotional gain. I do argue that such gain comes at a greater brand cost which ultimately will not benefit Disney or its licensees.  Brand management here is ensuring that the most iconic “image” is displayed properly so that all may see it as something solid and uncompromising. Allowing these display without consequences mean that it’s ok to have stormtroopers with the wrong helmet, or geriatric Darth Vader. If it is ok for that kind of display then surely it is ok for toys and other merchandising…slippery slope.